The Future of Civic Education Wycliffe Omira is a resident of the Junda ward in Kisauni Sub-county and also a civic educator with Uongozi Bora Community Initiative Project implemented by Kwacha Afrika. He has been a civic educator since the beginning of April 2018. The initiative has helped him as an individual in terms of having capacity on civic education, devolution and leadership. 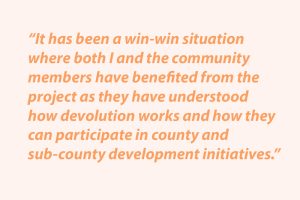 “As I was starting civic education, I realized that people did not have any knowledge of the constitution and importance of citizen participation but since civic education intervention strategies were put in place the community members of Junda have now taken up the challenge to involving themselves with various civic activities such as budget processes and public participation forums and are also challenging their leaders in various platforms. It has been a win-win situation where both I and the community members have both benefited from the project as they have understood how devolution works and how they can participate in county and sub-county development initiatives.” He said

Since his engagements with Junda residents on civic issues, there has been a positive change in perception on how the community views its leaders; the youth have become vibrant in looking to drive change in their ward considering how they were almost on the verge of losing hope in devolution. He has been able to push for the construction of a better feeder road in the ward which was causing nearby houses to flood whenever rainfalls.

However, the journey has not been a walk in the park. He has faced several challenges where most community members expect to be incentivized after the civic education engagements. This has been a culture for a political leader to incentify community members and has affected his work because he has not been able to meet his target numbers. Because of his focused and hardworking nature, Omira, as he is popularly referred to, has been forced to ride onto other community activities or gatherings for instance women gathering for Chama meetings or even mobilize a few people after a political gathering.

He has a great appreciation for Kwacha Afrika for ensuring that the civic education strategy works effectively and the capacity support he has received from it. “I am looking forward to meeting and impacting new groups of individuals with more information on devolution, citizen participation and county engagement on development agendas.” He concluded.